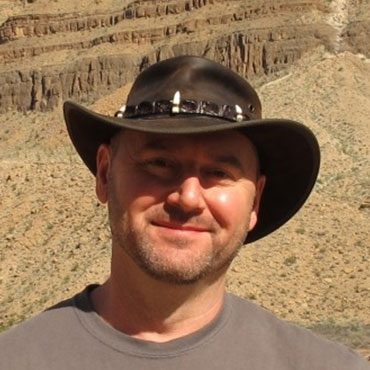 Matt has a BSc in Geology and Geophysics from Flinders University and a BSc(Hons) Geophysics from the University of Tasmania in 1999. He began his career as a field processing geophysicist in potential fields and EM, with occasional stints as a geologist, working all over Australia. Matt worked for 2 years at CGG as a marine seismic processor and worked on projects from many ocean basins. He also spent time working in Pau, France for the research group specialising in seismic velocity processing.

Following a desire to move into integrated geology and geophysics interpretation, Matt was contracted to the Geological Survey of Western Australia in the mid 2000s where he expanded skills in geological interpretation from geophysics and potential fields processing on many WA datasets. He also spent time performing field mapping and was first introduced to Intrepid and Geomodeller software.

At the end of his contract Matt moved to the UK to work as an interpretation and modelling geophysicist for Ark Geophysics (later ARKeX), where he worked with integration of seismic, potential fields and GIS in many basin environments from across the world. Matt returned to Adelaide at the end of 2007 and was employed as a uranium and base metals exploration geophysicist before he became a solo Geophysical Consultant and an Associate of Geointrepid in 2009.

As a consultant Matt worked extensively in oil and gas, geothermal, uranium, base metals, gold and coal exploration, specialising in integrated interpretation of potential fields, seismic, geology and GIS, and occasionally EM or MT. Since 2006 Matt has worked continuously with forward and inverse modelling of potential fields data and has become a specialist in stochastic inversion using Geomodeller and an expert Intrepid user.

His cross-disciplinary background qualifies him to work across Hydrocarbon, Minerals and Geothermal Exploration fields. Matt joined Intrepid in May 2013 to take on the roles of Product Specialist and Software Support. Matt remains an active member of ASEG and EAGE and has presented interpretation and modelling studies at several Australian and International conferences.